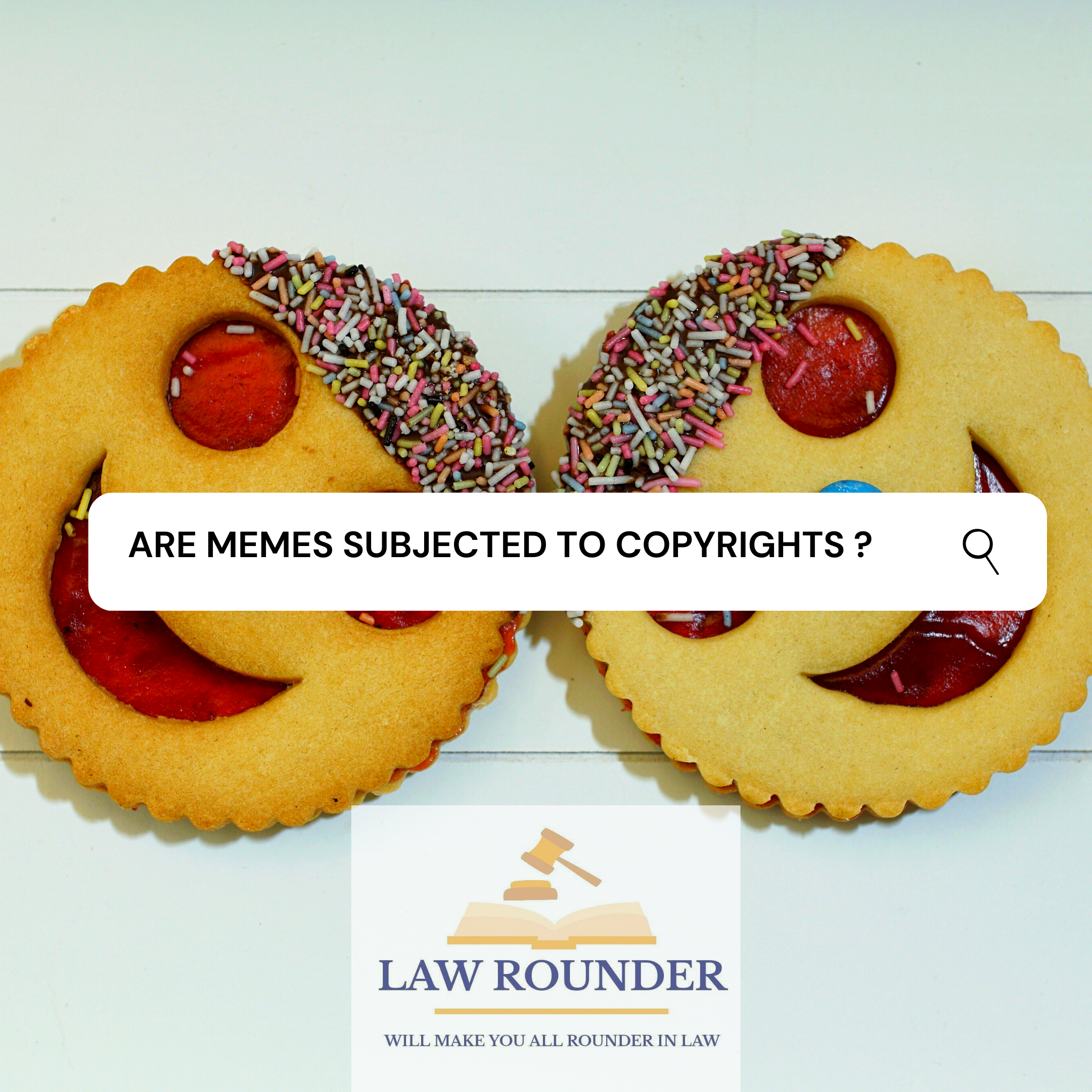 Memes prescribed by Richard Dawkins in his book “Selfish Gene” as an idea which is passed from one generation to another[1]. Memes in today’s world would be co-existence of different photographs, movie stills and illustrations. In the world of covid-19, everyone is living virtually. Suddenly things have stopped moving fleshly; rather they are virtual in nature. Nationwide lockdown suddenly increased the sharing of memes worldwide.

But, have you wondered whether simple memes can become a copyright issue? Are you sure that its art or copyright infringement that you have done?

In general terms copyright means a legal right that a person who created the artistic work holds. Copyright is the right on an intellectual property of an individual. When a person wants to use the original work, they have to ask for authorization from the owner.

Under Copyright Act, when a certain artistic work is copied, the person can sue for infringement based on the actual imitation of the work and not the reproduction of ideas, systems and information in public domain[3].

Copyright works include a wide range of work that is based on a certain idea of an individual, for example – book or a painting. It is a protection to safeguard the intellectual property of a being and it’s all original work against any unauthorized usage. When a person has a copyright over some work, he is granted certain exclusive rights mentioned under The Copyright Act, 1957.

An infringement happens where there could be no possibility of coincidence and the work of the complainant has been used illegally for unfair purposes.

Memes on internet today burgeon among the social sites. People often do not look into the perspective of memes and copyright. Although there is another perspective where it can be found out that due to internet usage, its law and privacy, copyright law somewhere traverses free flowing memes. Now, to understand the aspect of copyright on memes, first of all we need to understand the meaning of memes. Memes as defined by Merriam –Webster Dictionary is “an idea, behavior, style, or usage that spreads from person to person within a culture,” originating in the same root as “imitation”.

In the past years, the usage of internet and the ways of its usage have changed a lot which ultimately led to the promotion of memes.

When someone creates a meme, most of the time involves an image which is created by someone else. For instances the movie stills or an image taken by a photographer. These individuals have exclusive rights of ownership of their work but, the free flowing memes are the places at which there work is used without their permission. When a meme spreads, it infringes the copyright protection deemed by owner of the work as it is time and again reproduced and reposted.

Within the framework and laws that cover copyright protection, there is a doctrine which permits the fair use of the work in creation of another work. The factors which would determine whether a use is fair or not depends upon the case and its facts. Although, certain factors as the purpose of the use or the method of the use, its amount and its repercussion on the original work.

One such example of fair use is being witnessed by the social media on the occasion of Poshan Maah where the official information page of central government itself used the famous “Rasode m kaun tha” meme to spread awareness regarding the adaptation of important nutrients such as pulses in an individual’s life. These types of memes when used in the public welfare cannot be termed to violate the dignity or privacy of the original content owner.

Well, certainly it is very difficult to figure out whether the protected work has been misused or not, and particularly in the case of memes, the amount of the work that has been copied plays a vital role.

In 2003, the kid in star wars kid video was used by memers whereby the parents of the child later sued the child’s classmate for traversing the video online

Memes have become an inseparable part of social life where any of the work is suddenly copied and portrayed into one’s own word. To know a definitive answer in relation to copyright violation through memes, one has to look into a particular case as to how it has been utilized. There are people who believe them to be violative of someone’s idea while the other counterparts differ from this view. Meme is not original creation of work, and in cases it may happen that the original creator is not happy with the work which may give birth to legal dispute.

There also have been cases where the meme creators have sued the people who have used their memes. Warner Bros along with 5th Cell media lost a suit against the cat owners in “Nyan Cat” and “Keyboard cat”.  The topic of copyright over memes has not been given much attention as people who enjoy these memes hardly care to find out any copyright violations, if they exist.

The most important concept for the meme makers is the use of fair use doctrine in their content and its sharing. The bitter truth about internet life is that it is yet to analyze the intellectual property in social sites arena. It is true that memes come under the ambit of fair use but at the instance they infringe a person’s privacy, they can be liable for infringement and appropriate action can be taken accordingly and in that case a person cannot take up the defense of right to speech and expression, as it also has its reasonable restrictions. Thus, the younger generation that is involved in meme creation should take proper consent and authorization from the original creator before forming a sensational or prominent meme.

[1]India: Memes and Copyright: Fair Use or Infringement? , Available at, https://www.mondaq.com/india/copyright/668356/memes-and-copyright-fair-use-or-infringement , Accessed on 2nd September 2020

1 thought on “ARE MEMES SUBJECTED TO COPYRIGHT?”