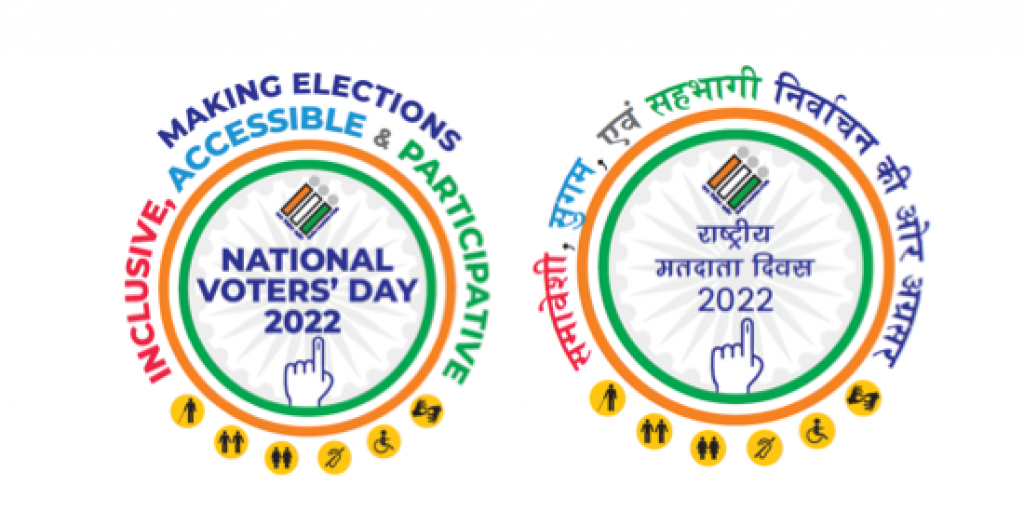 Theme for this year’s NVD is ‘Making Elections Inclusive, Accessible and Participative’

ECI Publication ‘Leap of Faith: Journey of Indian Elections’ to be released

To make the complete process hassle free and a memorable experience for all categories of voters.

Hon’ble Vice President of India, Shri  Shri M. Venkaiah Naidu has consented to be the Chief Guest for the national function. However, due to his inability to attend the function in person, his message will be virtually delivered during the function.

Union Minister for Law and Justice, Shri Kiren Rijijuwill grace the function as the Guest of Honour .

To mark the occasion,

IT initiatives, Security Management, Election Management, Accessible Elections and contribution in the field of voter awareness and outreach.

National Awards will also be given to important stakeholders like government departments, ECI icons and media groups for their valuable contribution towards voters’ awareness.

During the function, the newly enrolled voters would also be felicitated and handed over their Elector Photo Identity Card (EPIC).

The Commission has recently launched a new initiative to deliver the EPIC to newly enrolled voters, along with a personalised letter and a Voter Guidebook.

An ECI Publication ‘Leap of Faith: Journey of Indian Elections’ will be released.

The book narrates India’s electoral history and the growth of representative and electoral principles in India as it evolved from the nineteenth to twenty first century.

Diligently researched from accredited sources, the book contextualises the very role of elections in the making of modern India. The book focuses on the Election Commission of India’s persistent efforts to make the elections genuinely reflective of people’s verdict.

Another Publication ‘Pledging to Vote – A decadal Journey of The National Voters Day in India’ will also be launched. The book presents the journey of National Voters’ Day celebrations by ECI from Diamond Jubilee celebration onwards.

Dedicated to the voters of the country, the publication, especially, its pictorials are sure to inspire personnel who serve as ‘Frontline Warriors’ of Electoral Democracy’.

A national voter awareness contest on social media- ‘My Vote is my Future- Power of One Vote’ will also be launched to reiterate the importance of every vote through creative expression for the ongoing Assembly Elections 2022.

With a host of categories like Song, Slogan, Quiz, Video Making and Poster Design, the contest will be open to all. The winners shall be presented with exciting cash prizes and accolades.

Since 2011, National Voters’ Day has been celebrated on January 25 every year, all across the country to mark the foundation day of the Election Commission of India, i.e. 25th January 1950. The main purpose of the NVD celebration is to encourage, facilitate and maximise enrolment, especially for the new voters.

Dedicated to the voters of the country, the day is utilized to spread awareness among voters and for promoting informed participation in the electoral process.