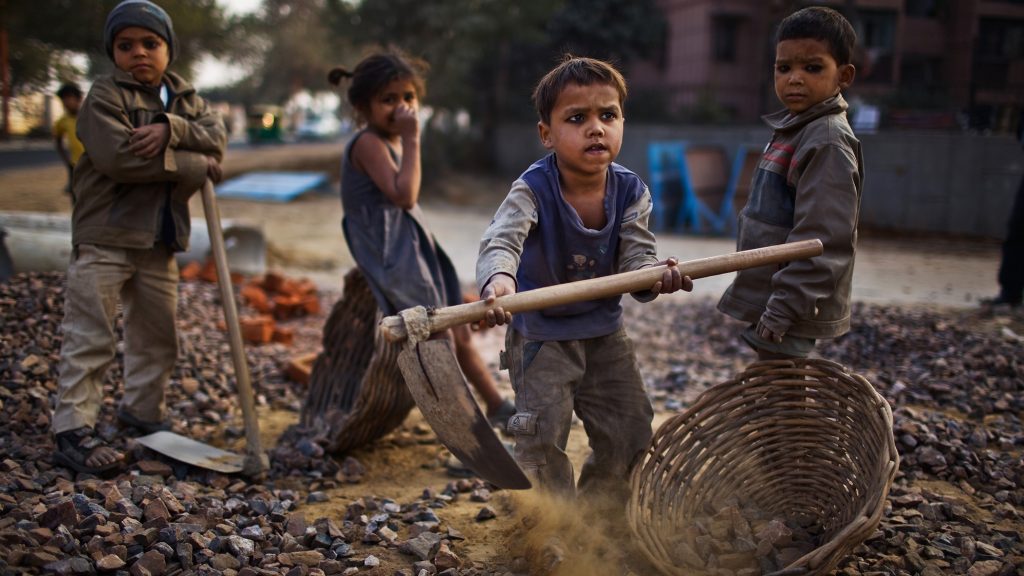 Nobel Laureate Kailash Satyarthi has fought to end child labor in India, where 11 percent of the country's children work. In 2010, these children toiled at a construction site in New Delhi.

So the basic concept of Labour laws is to maintain a good relation between labour and management. The old doctrine of Laissez-faire was no longer to be considered good there were several other theories also like supply and demand or hire and fire theory as these theories were not considered good in the public. If we look at the laws there are several aspects as compared to other branches of law there are various other aspects that talk about trade union, standing order or industrial disputes as there are other aspects. The Industrial disputes act 1947 is considered to be important social aspect because if we look at the trade union act 1929 it was enacted before independence and when it was enacted there were several strikes between the employees and the employer and the trade union usually help as a mediator between both the parties as with the coming of industrial dispute act 1947 the main
purpose of the act is ensure full justice to both the parties i.e. employer and the workmen and to advance in the industry by bringing about harmony and peace cordial relationship between the parties the act also enumerates the parties.

The act enumerates the contingencies as to when a strike or lockdown ca legally be enforced by the workmen or when these strikes are considered to be illegal or what are several conditions under which a workmen can get his rights back through legal means and the act also talks about discharging or dismissing the workmen. As the various matters of employees and employers are covered under this act and
it covers the whole India. The Act has been amended several times since 1949 till date the act is considered to be important legislation as it covers the modern aspect of industries and it settles the dispute through judicial machinery that has only one aim i.e. to maintain a cordial relationship between the “Peaceful environments in the industry”. If we look at the industrial disputes act and trade union act there are certain loopholes that are there in the trade union act i.e. there has been certain restraints that have been imposed on the rights of the strike and the lockouts in public utility services and anther aspect is that no certain provision has been made to render the proceedings inserted in an act of industrial dispute. As the defect that was in the trade union act 1929 was overcome during the war by empowering under rule
81-A of the Defence of Indian rules basically under these rules the central government could refer the industrial disputes to adjudicators and enforce the awards. So, the bill embodies the essential principles of Rule 81-A which is considered to be generally acceptable to both the employees and workmen retaining impact for most of the part, the provision of the trade union Act, 1929.

In this act there are certain provisions that has been made for settlement and the investigation for certain purposes of industrial disputes as this act applies and governs the service conditions conditions of the persons drawing wages upto a specified amount per month as this act is considered to be the supplement to the Indian Contract Act, 1872. The aim of the Indian Contract Act, 1872 was to regulate contractual relationship between employer and the employee. The aim of the Indian Contract Act 1872 was to regulate the contractual relationship between the employee and the employer similarly if take a look at the aim on Industrial Dispute Act 1947 it deals with the settlement and prevention of conflict between the employer and the employee and try to improve good relationship in case such relationship has not been harmonize in that case it can cause dislocation and collapse of industrial establishments of industrial peace as there are certain machinery through which the peace can be achieved i.e. Negotiation or compulsory adjudication.

So every act that has been introduced there is some of the following objective:
Basically in the case of Dimakuchi Tea Estate Karamchari Singh described the objective of the Industrial Dispute Act 1947:
1. To promote for securing and preserving amity and good relations between the employees and employer, to minimize the differences and to get the dispute settled through adjudicatory authorities.
2. To provide a suitable machinery for investigation and settlement of industrial disputes between employers and employee,. between employers and workmen or between workmen and workmen with a right of representation by a registered trade union or by an association of employers
3. To prevent illegal strikes and lockdown
4. To provide relief to workmen in matters of lay offs, retrenchment, wrongful dismissal and victimization.
5. To give the workmen the right of collective bargaining and promote the concept of
conciliation. Therefore the object of the act is to ameliorate the working conditions of the employees in an industry.

So there are certain key provisions that are described in the act as followed: 3 AIR 1958, SC 358.

III. Power and authorities According to the Industrial Dispute Act, 1947:

 National Tribunals have similar responsibilities on disputes pertaining to multiple states and of national importance.

So under fifth schedule unfair labour practices are described as following:

1.  To interfere with, restrain from, or coerce, workmen in the exercise of their right to
organize, form, join or assist a trade union or to engage in concerted activities for the
purposes of collective bargaining or other mutual aid or protection, that is to say–
(a) threatening workmen with discharge or dismissal, if they join a trade union,

(b) threatening a lock-out or closure, if a trade union is organized,
(c) granting wage increase to workmen at crucial periods of trade union organisation, with a view to undermining the efforts of the trade union organisation.
2.  To dominate, interfere with or contribute support, financial or otherwise, to any trade union, that is to say-
(a) an employer taking an active interest in organizing a trade union of his workmen;
(b) an employer showing partiality or granting favour to one of several trade unions
attempting to organize his workmen or to its members, where such a trade union is not a recognized trade union.
3.  To establish employer sponsored trade unions of workmen.
4.  To encourage or discourage membership in any trade union by discriminating against any workman, that is to say-
(a) discharging or punishing a workman, because he urged other workmen to join or organise a trade union,
(b) discharging or dismissing a workman for taking part in any strike (not being a strike which is deemed to be an illegal strike under this Act),
(c) changing seniority rating of workmen because of trade union activities,
(d) refusing to promote workmen to higher posts on account of their trade union activities,

(e) giving unmerited promotions to certain workmen with a view to creating discord amongst other workmen, or to undermine the strength of their trade union,
(f) discharging office-bearers or active members of the trade union on account of their trade union activities.
5.  To discharge or dismiss workmen-
(a) by way of victimization;
(b) not in good faith, but in the colourable exercise of the employer’s rights;
(c) by falsely implicating a workman in a criminal case on false evidence or on concocted evidence;

(d) for patently false reasons;
(e) on untrue or trumped up allegation of absence without leave;
(f) in utter disregard of the principles of natural justice in the conduct of domestic enquiry or with undue halt;
(g) for misconduct of a minor or technical character, without having any regard to the nature of the particular misconduct or the past record or service of the workman, thereby leading to a disproportionate punishment.
6.  To abolish the work of a regular nature being done by workmen, and to give such work to contractors as a measure of breaking a strike.
7.  To transfer a workmen main fide from one place to another, under the guise of following management policy.
8.  To insist upon individual workmen, who are on a legal strike to sign a good conduct bond, as a pre-condition to allowing them to resume work.
9.  To show favouritism or partiality to one set of workers regardless of merit.
10.  To employ workmen as “badlis”, casuals or temporaries and to continue them as such for years, with the object of depriving them of the status and privileges of permanent workmen.
11.  To discharge or discriminate against any workman for filing charges or testifying against an employer in any enquiry or proceeding relating to any industrial dispute.
12.  To recruit workmen during a strike which is not an illegal strike.
13.  Failure to implement award, settlement or agreement.
14.  To indulge in acts of force or violence.
15.  To refuse to bargain collectively, in good faith with the recognized trade unions.
16.  Proposing or continuing a lock-out deemed to be illegal under this Act.

B. On the part of workmen and trade unions of workmen.

So the concept of unfair labour practices that has been inserted in the industrial Dispute Act 1947 act this has created a better understanding between the employee and the employer because before there was no as such inclusion of strikes and lockouts under the trade union act 1927 and there were other provisions that were included in the act because with the inclusion of the unfair labour practices the main aim i.e. Harmonizing the relation between the employee and the employer Thus, we conclude that in case of industrial disputes,“the Industrial Disputes Act, 1947”plays a vital role in settlement of such kinds of disputes by making several machineries to handle those disputes. This chapter throws light over the objectives and the important feature of the Act. It clearly tells the Scheme and Scope of the Act. Thus we say that the Industrial dispute Act,1947 basically clears the scope of section 36A and powers of the appropriate government regarding reference of any question of the award for interpretation.